Lens distortion is a cosmetic-type optical aberration which does not decrease the amount of information in an image. It occurs when information is displaced geometrically, and while it changes the shape of an image will not result in image blur.

Distortion correction can be done post production in a photo editor, since the amount of distortion a lens introduces can be mathematically quantified at any given point. Distortion varies with wavelength, and in situations where a narrow band of light is used it may be computed at the central wavelength.  Digital fine-tune programs are often used to provide lens correction and eliminate unwanted distortion from a final image.

In some situations, distortion is engineered into a system. There are many reasons why a lens distortion effect may be desirable. In laser applications, f-theta lenses are chosen to introduce a certain amount of distortion into an optical system. In cameras, image creators use an effects library which includes radial distortion, barrel distortion, perspective distortion and pincushion distortion to introduce novelty effects into their images. Wide angle lenses and zoom lenses also create their own signature type of distortion.

The amount of optics distortion typically can be expressed as a percentage of the predicated image height.

Distortion is defined as

For a conventional camera lens, the predicated or ideal image height yp can be calculated using Equation 2.

Distortion, which describes the deviation of the actual image height y from the idea image height ?∙????, is defined as 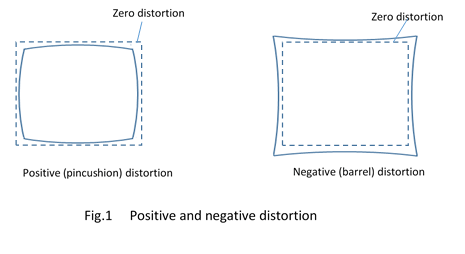 Distortion in a simple lens is a third-order aberration which increases with the cube of the field height. Since distortion affects the image shape, its appearance is very important especially in visual systems. Generally distortion in the order of 2 to 3% is acceptable visually. Figure 2 shows images of a rectilinear object with zero distortion and -3% distortion. 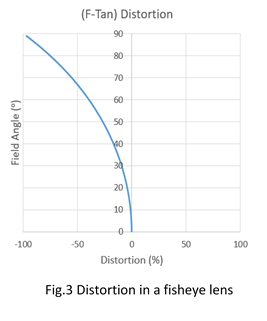 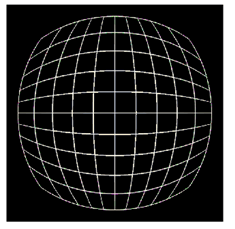 For a multi-element lens assembly distortion will usually be positive or negative, but it may not be linear across the image. One should also be aware that the level of distortion may change as working distance changes and is dependent on wavelength.

Some lenses that are engineered to exhibit very low levels of distortion may have both positive and negative distortion. This type of distortion is called moustache or wave distortion, and requires special attention to wavelength when calibrating software to remove distortion from the final image.

F-theta lenses (used in laser scanning systems) are usually designed to produce a certain amount of distortion (barrel distortion) so that the image height is proportional to the field angle of θ. The ideal image height of an f-theta lens can be calculated using Equation 4

As with other aberrations, F-theta distortion is determined by the optical design of the lens. Shanghai Optics Inc. has over 55 years of experience in design and manufacturing low distortion f-theta lenses. Fig.5 shows the F-Theta 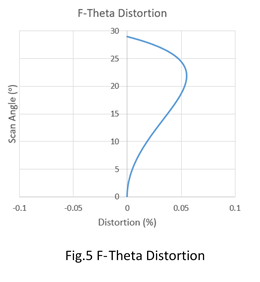 Distortion in a scanning lens with the maximum deflection angle of 29ᵒ.

Unlike other types of distortion which are part of the inherent properties of the lens, keystone distortion is caused by improper alignment in a lens array. As light hits each lens and is transmitted onward, rays cross, resulting in parallax and a trapezoidal image. Keystone distortion can often be avoided by careful attention to alignment when creating lens arrays, and may also be corrected in post-processing.

Our extensive optical experience and state of the art metrology equipment allows us to test every lens which we manufacture at Shanghai Optics, and we can provide distortion curves for specific lenses upon request. Although distortion is primarily cosmetic, it remains an important quality of every lens and the level of distortion can greatly change the ease in which information is gleaned from a system or the CPU load required for post processing.