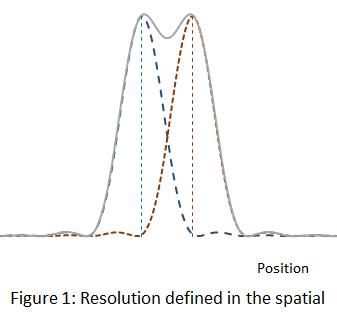 Resolution of the imaging system is a quantity without a standardized definition. Resolution can be defined as the separation, either in object-space angle or in image-plane distance. For which two discrete point targets can be easily discerned. Figure 1 illustrates the characteristic behavior of image-irradiance-vs-position plots in spatial domain.

Resolution can also be specified in the spatial-frequency domain as the inverse of this separation (lp/mm). A user might specifythat “the imaging optical system must resolve 100 lines per millimeter. That means a user can distinguish the presence of detail in the image separated by 1/100 millimeters.

Where λ is the wavelength expressed in mm andNAis the numerical aperture of the lens. An optical system cannot transmit information of spatial frequencies higher than the cutoff frequency. Shorter wavelengths yield higher resolution.

Each individual component within the imaging system can have contributions to the overall performance (MTF and resolution).Resolution can be the limiting frequency at which the MTF falls below a particular threshold, the noise-equivalent modulation (NEM), seen in Figure 2. 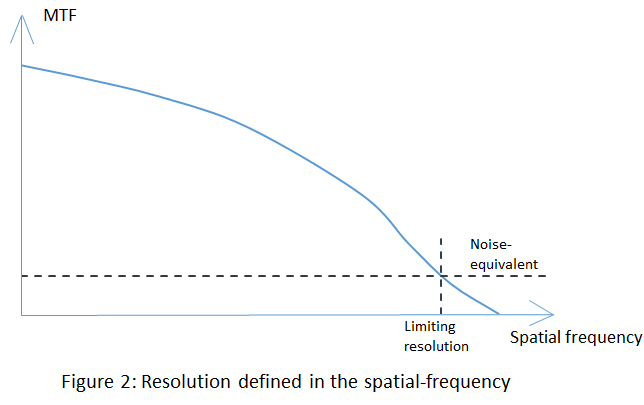 Using either definition, resolution is a single-number performance specification, and as such, it is often seen as being more convenient to use than MTF (which is a function instead of a single number).