Lesson 3 – How Does Light Travel? Part I: Diffraction and Reflection

Posted on: Monday, January 24th, 2022  In: Learning Optics with Austin 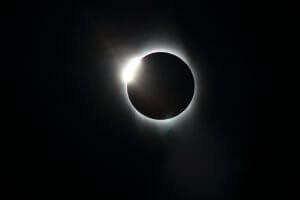 What a solar eclipse demonstrates is the rectilinear propagation of light, or simply, that light moves in straight lines. Light paths are also independent of one another. Thus when light rays cross, they do not change each other’s trajectory. A related property is the reversibility of the optical path, or being able to trace light back to its original light source. As long as light is not blocked by a barrier, the rectilinear propagation of light holds true. However, if the barrier size is smaller than the wavelength of the light, then diffraction occurs in which light waves no longer travel in a rectilinear path. Instead, light waves bend around the edge of the barrier (which is a phenomenon that can be observed in water waves too). 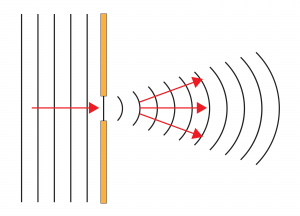 When light meets a surface, there are two major effects. The first is reflection, or the bouncing of light off a reflecting surface. There are two types of reflection. The more common type of reflection is diffuse reflection in which light strikes a “rough” surface and its waves bounce off in multiple directions. The other type is mirror reflection in which light rays reflect off a smooth surface parallel to one another. The smoother the surface, the clearer the image, which is why a glass mirror produces a clearer image than a copper mirror or water on a lake.

But what happens when light passes through a surface (the second effect when light hits a surface)? Stay tuned for the next post as we delve into the angles, twists, and mediums of refraction!

Next: Lesson 4 – How Does Light Travel? Part II: Refraction