Posted on: Monday, April 4th, 2022  In: Learning Optics with Austin

Besides lenses and mirrors, prisms are another group of common optical elements. White light that enters a prism leaves as many different colors due to the different refractive indexes of each color’s wavelength (a topic that will be covered in further depth in the next post). Besides refracting white light, prisms have another useful property that can result in 100% reflectivity (no exaggeration!). A reminder (from post #3) that reflectivity is the percentage of light that is reflected off a surface. Even with the most expensive coatings and smoothest surfaces, even mirrors cannot match the 100% reflectivity characteristic of prisms. How is it that prisms can surpass mirrors in reflectivity? 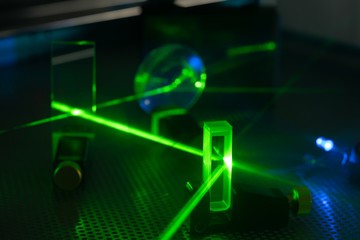 After all this math, you might be wondering- why should I care? Remember that the incidence angle being greater than the critical angle is the second condition of total internal reflection. This property is what gives prisms 100% reflectivity, which is a feat even mirrors cannot achieve. By taking advantage of this property, you can save a lot of money and simplify the design of the optical system you are designing!